There's no single formula for a great talk, but there is a secret ingredient that all the best ones have in common. TED curator Chris Anderson shares this secret -- along with four ways to make it work for you. Do you have what it takes to share an idea worth spreading?

2. How to speak so that people want to listen

Have you ever felt like you're talking, but nobody is listening? Here's Julian Treasure to help. In this useful talk, the sound expert demonstrates the how-to's of powerful speaking -- from some handy vocal exercises to tips on how to speak with empathy. A talk that might help the world sound more beautiful.

3. Your body language may shape who you are

Body language affects how others see us, but it may also change how we see ourselves. Social psychologist Amy Cuddy argues that "power posing" -- standing in a posture of confidence, even when we don't feel confident -- can boost feelings of confidence, and might have an impact on our chances for success. NOTE: Some of the findings presented in this talk have been referenced in an ongoing debate among social scientists about robustness and reproducibility. Read "Criticisms & updates" below for more details as well as Amy Cuddy's response.

4. The clues to a great story

Filmmaker Andrew Stanton ("Toy Story," "WALL-E") shares what he knows about storytelling -- starting at the end and working back to the beginning. Contains graphic language ...

5. This is your brain on communication

Neuroscientist Uri Hasson researches the basis of human communication, and experiments from his lab reveal that even across different languages, our brains show similar activity, or become "aligned," when we hear the same idea or story. This amazing neural mechanism allows us to transmit brain patterns, sharing memories and knowledge. "We can communicate because we have a common code that presents meaning," Hasson says.

10 Reasons Why Networking Is Essential For Your Career Agile • Management

We have over 100 free courses available to explore, all created by expert trainers, packed full
of practical exercises and real-world examples.

Make sure you Safeguard Your Training Investment. DCM offer courses accredited by: 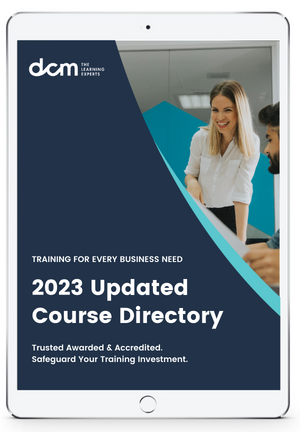 We've emailed you the course brochure. We'll be in touch to make sure you have all the information you need.

Just to let you know, we are offering €200 credit for the course when you become a member with DCM. Join our community of over 20,000 members today.

We are very proud of our advisory team in DCM Learning. If you have any questions at all please feel free to ask our team.

We value your privacy and we will only get in touch about upcoming courses or events that are available to members.